Waiting on Wednesday originally started on the wonderful book blog, Breaking the Spine.

This week, I would like you all to drool over Fate of Flames by Sarah Raughley.
For starters, let's just look at this GORGEOUS cover.  I want it on my shelf just so I can look at it! 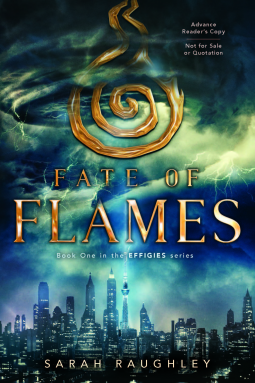 NetGalley Description
Four girls with the power to control the elements and save the world from a terrible evil must come together in the first epic novel in a brand-new series.

When Phantoms—massive beasts made from nightmares and darkness—suddenly appeared and began terrorizing the world, four girls, the Effigies, each gained a unique power to control one of the classical elements: earth, air, fire, and water. Since then, four girls across the world have continually fought against the Phantoms, fulfilling their cosmic duty. And when one Effigy dies, another girl gains her power as a replacement.

But now, with technologies in place to protect the world’s major cities from Phantom attacks, the Effigies have stopped defending humanity and, instead, have become international celebrities, with their heroic feats ranked, televised, and talked about in online fandoms.

Until the day that New York City’s protection against the Phantoms fails, a man seems to be able to control them by sheer force of will, and Maia, a high school student, unexpectedly becomes the Fire Effigy.

Now Maia has been thrown into battle with three girls who want nothing to do with one another. But with the first human villain that the girls have ever faced, and an army of Phantoms preparing for attack, there isn’t much time for the Effigies to learn how to work together.

Can the girls take control of their destinies before the world is destroyed forever?

Why I'm Pumped About It
First, I love strong female characters.  And, with not just one, but four girls who have to take charge of their destinies, we are bound to have that!  I am thinking that Maia is going to be a main part of getting them to shut up about their differences and band together, but who knows for now?  (If you've already read your ARC of this then you can just hush.  No one likes your bragging ways!)

Next, I'm a huge Buffy fan.  I love that Raughley uses the same idea that "when one Slayer dies another is born." but is replacing it with her Effigies instead!  This is especially awesome because that makes these girls realize just how strong they are.  And who knows who it's going to be?

I'm really excited to see how Raughley handles the idea of the the Effigies being treated as celebrities.  Will there be some older individuals in the cities who think that the girls should hold more respect for their powers?

My Dirty Little Secret
NetGalley just sent me the email that I will be able to read the eARC of Fate of Flames!  I've struck gold!  WOOT!  That will be posted closer to the beginning of November.  Yesterday was our first day back to school, so I have a bit more of my time filled up.  I will write as often as possible!

So, what book are you looking forward to this Wednesday?  What ARCs or eARCs have you received that you are super pumped to read? Leave your answer as a comment below!

Also, I'm kind of toying with the idea of sharing a little bit about teacher life.  Are you interested?  Should I just save it for the re-caps? Let me know!
Posted by Jessa Julian at 8:00 AM