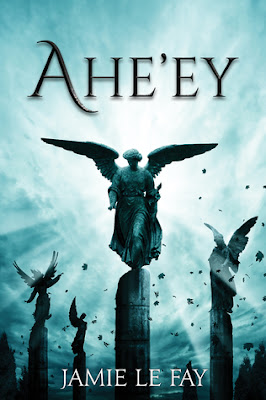 Description from GoodReads
Morgan's feminist books didn't prepare her to deal with the dashing Gabriel and the land of Ahe'ey...

Morgan is a dreamer, change maker and art lover. She is a feisty, slightly preachy, romantic feminist full of contradictions and insecurities. Morgan uncovers a world where women have the power, and where magic is no longer just a figment of her wild imagination. Sounds like a dream, but it may, in fact, turn into a nightmare.

The world of the Ahe'ey challenges and subverts her views about gender, genes, and nature versus nurture.

The strong and uninvited chemistry between her and the dashing Gabriel makes matters even more complicated. His stunning looks keep short-circuiting her rational mind.

My Thoughts
I cannot think of a better introduction to Le Fay's wonderful writing style than Ahe'ey.  I instantly fell in love with her imaginative and detailed descriptions and her subtle way of stating her political opinions.

Le Fay deserves praise for her characterization skills.  Each one felt so real that I was able to understand their motives and ideals as easily as I can understand my own.  The same can be said for her world building abilities.  Not only does Le Fay bring a whole new world to life, she explains it well and it truly makes sense.  It is very easy to understand the foreign concept that is Ahe'ey.

Additionally, Gabriel was such an easy character to fall in love with!  I love how multifaceted he is.  There is the side of him that he brings out around his family, at work, and around Morgan.  Although I'm not completely convinced by their romance, I can definitely see the underlying attraction there.

The only problem I had with this book is that Morgan accepts Ahe'ey a little too easily.  Personally, I would think that all of the people explaining their land and rules would be off their rocker if I was suddenly just there.  I understand that she can see everything in front of her, but I was really surprised that she never had an overwhelming fit of confusion.  She merely accepts it all.  I'm not sure if that was meant as a survival tactic or if that was just part of Morgan's personality that I failed to understand.  However, the more realistic approach would have been for her to have some form of freak out moment. 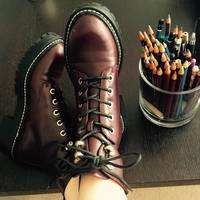 About the Author
From as young as I can remember, I have soothed myself to sleep by imagining epic stories of heroes, heroines, sorceresses, dragons, angels, and demons. I based my stories on the books and movies I was watching and the narratives that moved and inspired me.

I was as excited and delighted with Pride and Prejudice and Jane Eyre as I was with Battlestar Galactica (the original TV series). The Mists of Avalon, an Arthurian legend retelling from the point of view of the female characters, had as much effect on me as Cosmos by Carl Sagan.

I imagined myself occupying the boots of the hero as much as I occupied the glass slippers of the damsel in distress. The first one was what I wanted to be; the second was what society wanted me to be, and I believed them, for a little while.

I am fascinated by my inner world when it comes to associating myself with the male hero. From childhood, I wanted to be him and marry him. He was my role model, the courageous, honourable, virtuous, humble, and sometimes conflicted hero that is so well expressed in Aragorn, Darcy, or Apollo from the original Galactica. I never had time for bad boys. I was always mesmerised by stories of brotherhood: two men that would honour and risk their lives for each other. How I wished at the time to see women portrayed in the same way.

My relationship with female characters was more complex, possibly reflecting my relationship with myself and mirroring the bare, deserted female landscape provided by the media at the time. My youth and my inner world were most influenced by Zimmer Bradley’s Morgaine Le Fay, the underdog, the magician, and the misunderstood and undervalued priestess of my childhood who painted a vivid picture that the world does not welcome powerful women, that they are rejected, vilified, and unloved. She was the character that made me want to be the powerful dark-haired, average-looking sorceress instead of the beautiful blond girl who got to marry the king.

As I grew into adulthood and discovered quite late in my life the welcoming arms of the feminist movement, I went through all stages of grief, including rage. Fortunately, rage does not last long in the body of a creative optimist.

As I gained the courage to write my own fiction, I was conflicted. I knew my imagination and power came from my truth, but I also knew I needed to honour the millions of voices that are screaming for better representation of minorities. I am one of those voices, dissecting each new book and movie, criticising the stereotypes, the common places, and the limiting depictions of gender, race, and sexuality.

This book was a great teacher that opened my eyes about how difficult it is to write engaging fiction and do justice to the people of the world. Can a Western, Caucasian, European woman really do justice to diversity beyond gender? Can she avoid creating stereotypical villains and heroes?

In the end, I have done my best to honour the world while being true to myself and to the characters and stories that inspire me. To be able to pour my heart out, I had to let go of what I should be feeling and writing. I had to embrace my flaws and my inner demons.

So that is all, what is left is a book that fully embraces everything I love: feminism, romance, friendships, social justice, environment, science, magic, and art. I found a big old pot, put in a few archetypes that have inspired people from the beginning of times, and mixed in the story lines and characters that have touched me throughout my life. I seasoned it all well with social consciousness and the life lessons that have made me grow as a human being. I fully embraced my geekiness and my romantic heart. I have submitted to my, sometimes overwhelming, idealism—the idealism that keeps my fire burning and gave me the courage to write Ahe'ey.

Much Love, Jamie
Posted by Jessa Julian at 9:25 AM