Cover Reveal and Giveaway! Slippers and Thieves by Christina Bauer 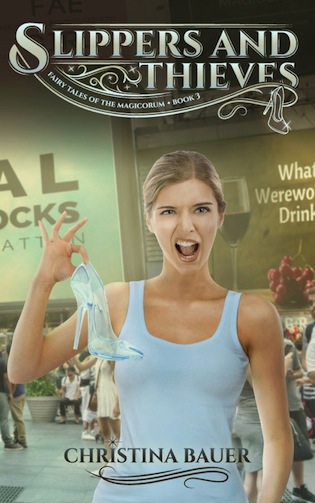 
Years ago, Elle—never call her Cinderella—escaped her evil step family in order to build a new life for herself in Manhattan. Today, Elle’s awful past is a distant memory. In fact, Elle even attends West Lake Prep, an exclusive high school where regular humans mix with members of the Magicorum, such as fairies, shifters and witches. Although she still must live in hiding from her evil stepfamily, Elle has always found ways to get whatever her heart desires.
That is, until Alec Le Charme.
Alec is the heir to the Le Charme dynasty of high-end jewelers. He’s also kind, charismatic, has a knee-melting smile. Elle has fallen for him, hard. Unfortunately, thanks to Elle’s evil step family, Alec is absolutely off limits. In fact, if Elle and Alec so much as kiss, it will start a magical chain reaction that would end in powerful factions of witches and wizards going to war. As a result, Elle and Alec vow to stay friends, no matter what. Then West Lake Prep holds a masquerade ball. Identities get mixed up and forbidden kisses are finally shared.
Time for the Magicorum to go to war, and for Elle to confront her hidden past in ways she never thought possible.

Previous books in the series:

Author Bio:
Christina Bauer knows how to tell stories about kick-ass women. In her best selling Angelbound series, the heroine is a part-demon girl who loves to fight in Purgatory’s Arena and falls in love with a part-angel prince. This young adult best seller has driven more than 500,000 ebook downloads and 9,000 reviews on Goodreads and retailers.
Bauer has also told the story of the Women’s March on Washington by leading PR efforts for the Massachusetts Chapter. Her pre-event press release—the only one sent out on a major wire service—resulted in more than 19,000 global impressions and redistribution by over 350 different media entities including the Associated Press.
Christina graduated from Syracuse University’s Newhouse School with BA’s in English along with Television, Radio, and Film Production. She lives in Newton, MA with her husband, son, and semi-insane golden retriever, Ruby.