Review: Save the Date by Morgan Matson 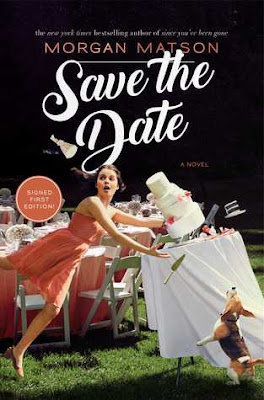 Save the Date by Morgan Matson
Published by Simon Schuster Books for Young Readers on June 5, 2018

I received this book from Uppercase Box.  Neither the author nor the publisher requested this review.

Charlie Grant’s older sister is getting married this weekend at their family home, and Charlie can’t wait—for the first time in years, all four of her older siblings will be under one roof. Charlie is desperate for one last perfect weekend, before the house is sold and everything changes. The house will be filled with jokes and games and laughs again. Making decisions about things like what college to attend and reuniting with longstanding crush Jesse Foster—all that can wait. She wants to focus on making the weekend perfect.

The only problem? The weekend is shaping up to be an absolute disaster.

There’s the unexpected dog with a penchant for howling, house alarm that won’t stop going off, and a papergirl with a grudge.

There are the relatives who aren’t speaking, the (awful) girl her favorite brother brought home unannounced, and a missing tuxedo.

Not to mention the neighbor who seems to be bent on sabotage and a storm that is bent on drenching everything. The justice of the peace is missing. The band will only play covers. The guests are all crazy. And the wedding planner’s nephew is unexpectedly, distractingly…cute.

Over the course of three ridiculously chaotic days, Charlie will learn more than she ever expected about the family she thought she knew by heart. And she’ll realize that sometimes, trying to keep everything like it was in the past means missing out on the future.

Unfortunately, this is one of those times when I have no choice but to be painfully honest.  I subscribed to Uppercase Box as a birthday present to myself and was really excited.  I got my first box, saw Save the Date, and thought, "Oh yay.  Another stupid girly romance book."  Now, don't get me wrong.  I'm a hopeless romantic and I love a good rom com, but I HATE when the lead in them is a super girly girl.  And, based on the cover, that was exactly what I thought I was getting myself into.  I simply knew that I could not handle a book filled with, "Like, omigod! Frfr he's so cuuuuuuuuteeeeeee!"  But, I bought the dang book, I'll be danged if I don't read it.

This was definitely not what I expected!  Instead of a cheesy romance, I found a book filled with character development, comedy, and a character who really steps into her own skin for once in her freaking life.  I loved it!

What I Didn't Love

This may have been my first time reading Matson's work, but it will not be the last.