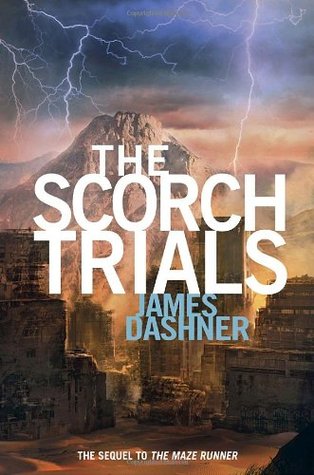 The Scorch Trials by James Dashner
Published by Delacorte Press on October 12, 2010

Solving the Maze was supposed to be the end.

Thomas was sure that escape from the Maze would mean freedom for him and the Gladers. But WICKED isn’t done yet. Phase Two has just begun. The Scorch.

There are no rules. There is no help. You either make it or you die.

The Gladers have two weeks to cross through the Scorch—the most burned-out section of the world. And WICKED has made sure to adjust the variables and stack the odds against them.

Friendships will be tested. Loyalties will be broken. All bets are off.

There are others now. Their survival depends on the Gladers’ destruction—and they’re determined to survive.

When I started this book, I was incredibly bored. This is one of the most accidentally slow beginnings that I have ever read!  I know that there was a lot of action going on that I was supposed to care about, but I just didn't.  Because on of my students chose this series for me to read (I made him read The Hunger Games), I knew I had to do it.  I most definitely did not want to.

Luckily, however, the book started to pick up some speed. When Aris was introduced and we were given a little more information about the second phase, I wanted to know what was going on.  If that hadn't have happened, this would have been the world's longest book.  Oy.

However excited I was to be getting more information, the story did not pick up.  I was very frustrated that this book continued to be mostly predictable.  There were a few places that truly surprised me, but they were infrequent and did not really seem to connect to the story as a whole.

I will continue to read this series at the request of my student, but I truly hope that it picks up a bit.  Although this book was not impressive, The Maze Runner was decent.  I hope that Dashner picks it back up with the next book.