Sink Your Teeth Into It! A Review of Vampire Boy by Aric Cushing 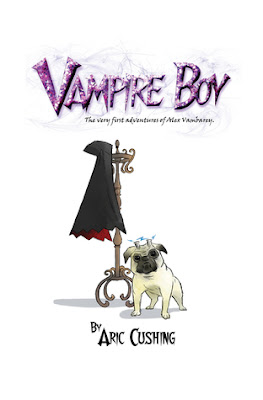 Description from GoodReads
When Alex Vambarey attends his first year at the Carpathian Academy, he has no idea that there are other creatures besides vampires. He's never met a gargoyle, or a pixie for that matter. Of course he's read about them -- in the Vampedia -- but in real life? No way. But now everyone's trying to figure out the Magus riddle and win the school prize. Even the Brownies are all befuddled!

Well, maybe it's natural. It's his first term, and there are all sorts of things that don't make any sense. Like all the janitors collecting dirt. That's just plain weird. No, there was definitely something bigger going on. Way bigger. And if he was right, the secret was somewhere in the Night Gallery. The secret about Carpathia, and the secret about himself!

My Thoughts
Fans of Harry Potter, BEWARE!  You will probably do the same thing I did with this novel-sit down to read it and not stand up again until you run out of book.  This story absolutely mesmerized me.

Many of the characters are both well-developed and comical.  I especially adored Otis, and believe that many middle school boys will relate to this gargoyle covered in volcano marks who loves to chow down. He definitely had the energy that many of them do.

Additionally, I liked that this book gives students a riddle to think about.  Not only does this encourage critical thinking skills to develop, it encourages them to keep reading.  Therefore, two of the struggles that reading teachers deal with are faced head-on by the book itself.

Finally, I appreciated Cushing's decision to provide a glossary at the beginning of the novel and a definition of each of the words as they are encountered in the novel.  Middle school students require this repetition and it is apparent that Cushing knows what his audience requires.

Unfortunately, there are a few things that I need to critique.  At one point, for example, a character speaks and is named before ever being introduced.  It felt like I was in a car with Joe, Sally, and Chuck, yet Dave is talking.  Huh?  How does that work?

I also felt that there were a few parts that Cushing should have used more space in the novel to better develop.  This leaves students two choices.  Do they use their imagination to think up those explanations, or do they just ignore it.  In my experience, many will just ignore the parts that aren't spelled out.

Overall, I truly enjoyed reading this book.  I would LOVE to share this with my seventh grade class.

The following was taken from IMDB.

Aric Cushing studied at the American Conservatory Theater and the London Court Theater in England. He grew up in the Northern California Redwoods and divides his time between acting and writing. He is a member of the Horror Writers Association of America and the Co-Founder of The Fear and Fantasy Film Festival.

Vampire Boy has recently won first place for the Readers View Awards.  You can read about that here.