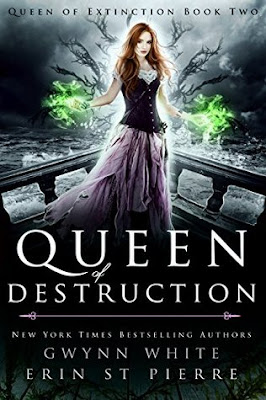 I received an eARC from the author in exchange for my honest and unbiased review.

Description from GoodReads
Aurora and her allies barely escaped Ryferia with their lives. With the help of her would-be husband Jorah, the princess must trust in unlikely allies to have a chance against her arch enemy. An oracle with a flare for the dramatic may hold the key to Ryferia’s survival…

Jorah has deep feelings for Aurora, but he doesn’t have the heart to take down the shrine to his lost love. Between Aurora’s distrust and a broken promise with the vengeful Sabrisia, Jorah uses dragon magic and trickery to buy himself time. But nothing will convince Aurora that he loves her…

But all is not lost. One of Aurora’s new allies may turn the tide in her fight against Raith. The only problem is that he may conquer her heart as well…

I was surprised to find that I didn't hate the main villain, Raith, nearly as much as I hated his brother, Carian.  I wanted Raith to finally find compassion and possibly be released from his addiction to power.  Carian, on the other hand, I wanted to watch as he writhed in pain and despair.  How dare he be so cold and calculating!  The authors did a fantastic job writing such a despicable character.

Aurora has definitely grown since the first book.  No longer restrained by her Infirmity, she is beginning to understand how much personal, and magical, power she truly has.  Her greatest moments of strength are shown in this novel.  Not only is she forced to believe in herself, which can sometimes feel impossible, she is encouraged to assert herself to the friends that have always guarded her and she is able to be open and honest about her emotions.  While none of these seem especially action filled, the authors use them to make Aurora as realistic as possible.  After reading this book, I am able to identify with her so much more!  It feels like she is a living and breathing person.

In addition to the vast amounts of character building accomplished in this book, the world building is beautifully done.  Every question the first book left me with was answered in this sequel.

While there was plenty of character and world development, the authors provide a ton of excitement and adventure.  I was so happy to see the detailed fight scenes.  Not only were they plausible, they captured the humanity of the emotions spurring on each fight.

I think this is the point I'm supposed to say something critical, you know, something I didn't like.  I guess I'll close on this one thing.  I have to wait for the next book.  Not ok.

I’m a New York Times bestselling author of epic steampunk fantasy novels set on distant planets. All my stories have an adventure at the heart, mixed with a liberal sprinkling of romance and intrigue. To confuse things, I also write adventure travel books set firmly on planet Earth. Weird, I know, but it makes me tick.

I live in Western Australia with my husband, Andrew, my three daughters, a yapping Toy Pomeranian, and a fantastic farm cat called Pixel.

When I’m not writing, I’m reading, traveling, herding kids around, taking dogs for walks, and avoiding all cooking. You can contact me via my contact form or my email: gwynn@4xoverland.com

Erin St. Pierre
Erin St. Pierre is a twenty-year-old author and world traveler. South African born, she has lived in three different countries on three different continents. Still, that is not enough. She wants to travel the world, writing, drinking hot chocolate, and eating cheesecake. She currently lives in Western Australia (who knows how long that will last) with the best cat in the world. She started writing at around fifteen or sixteen, and Queen of Extinction, co-authored with Gwynn White, is her first published work. And it will definitely not be her last.