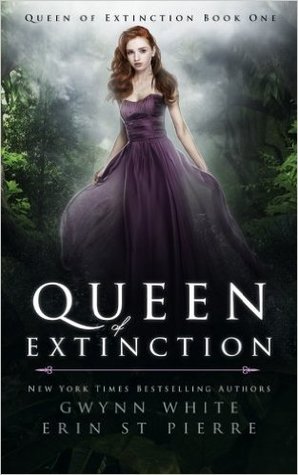 Goodreads Description
A magical princess. A kingdom in danger. A fight to the death for the throne. Princess Aurora never thought she’d have to rule Ryferia. That was her brother’s job, until his brutal murder at the hands of their uncle. She knows the law. A marriage is her only chance to take the throne. Aurora gambles for her kingdom, invoking the right for a deadly marriage trial. As the most gifted--and ruthless--princes and lords battle to the death for her hand, the forces of evil conspire to snatch Aurora’s throne. But the princess has allies, as well as a secret power long outlawed in her kingdom… Will Aurora find true love and save Ryferia or will the trial’s winner destroy them all? Queen of Extinction is a fresh take on the classic Sleeping Beauty tale. If you like magic, steampunk, and romance, then you’ll love the first book in a new trilogy by Gwynn White and Erin St. Pierre.

My Thoughts
I am absolutely in love with this book!  As soon as I finished it, I lay flat on my back and just let myself breath hard for a while because I felt like I had run out of a part of myself when I ran out of pages in this book.  It was an absolutely wonderful ride.

I honestly expected to hate Aurora.  I greatly dislike women who are unable to fend for themselves and feel the need to be dependent upon their man.  Aurora's description made me worry that would be the case.  Thank you, thank you, thank you for proving me wrong!  Aurora is absolutely delightful!  I loved that she was willing to think for herself and to constantly push herself despite her Infirmity. She is such a believable character and I think the authors did a fantastic job with their heroine.   Throughout the novel, however, Aurora is referred to as "ugly" or "homely" and I love that she is able to love herself and to be part of a romance novel without being the stereotypical beauty.  As a female in today's society and an active mentor to several teenage girls, I think it is important for oung ladies to see such women.  I don't think that there is enough literature that encourages these girls to accept themselves and would like to congratulate the authors for successfully approaching and portraying such an important theme.

My favorite character, however,was Jorah.  Here was a being who had to suck up everything that he had been going with for so long and to get over his stubborn ways.  Was it easy?  NO. Did he do it?  Mostly.  We are just going to have to wait and see what the authors bring us in book two!

My least favorite character was Aurora's uncle, Artemis.  Man, did he get under my skin!  Could he be any more rude?  Although there was plenty of negativity between Artemis and Aurora, Artemis was not the main bad guy.  I liked the true villain of the novel more than I liked this scumbag!  He is the epitome of elitism and feelings of entitlement.  He is definitely on the same level as Dolores Umbridge of the Harry Potter series!

The authors chose a wonderful way to write this piece.  They switch between Raith, Jorah, and Aurora's points of view.  This allows for complete character development of the two who are trying the hardest to win her hand-one for dark and one for light, respectively.  It was WONDERFUL to watch both sides of the spectrum develop.

As the trials in the novel developed, I thought that the authors did a terrific job of suiting the trials to the prize.  Each trial shows one aspect of who Aurora is, be it her culture or her hobbies.  This only added to the all ready wonderful characterization.

One thing that tends to push me away from novels is the editing of the book.  As I write this review, I can't think of a single typographical error in the entire book!  I can't think of the last time that happened!

I have been wracking my skull all day to think of one thing I don't like about the book.  And, by golly, I think I've done it-- its sequel, Queen of Destruction, will not be released until April 2017.

I’m a New York Times bestselling author of epic steampunk fantasy novels set on distant planets. All my stories have an adventure at the heart, mixed with a liberal sprinkling of romance and intrigue. To confuse things, I also write adventure travel books set firmly on planet Earth. Weird, I know, but it makes me tick.

I live in Western Australia with my husband, Andrew, my three daughters, a yapping Toy Pomeranian, and a fantastic farm cat called Pixel.

When I’m not writing, I’m reading, traveling, herding kids around, taking dogs for walks, and avoiding all cooking. You can contact me via my contact form or my email: gwynn@4xoverland.com

Erin St. Pierre
Erin St. Pierre is a twenty-year-old author and world traveler. South African born, she has lived in three different countries on three different continents. Still, that is not enough. She wants to travel the world, writing, drinking hot chocolate, and eating cheesecake. She currently lives in Western Australia (who knows how long that will last) with the best cat in the world. She started writing at around fifteen or sixteen, and Queen of Extinction, co-authored with Gwynn White, is her first published work. And it will definitely not be her last.