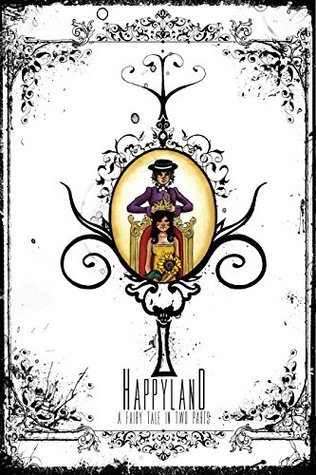 Would you like to court me to Happyland?" Prince Gobbledygook asks Lily Marshmallow and himself. Therein the journey begins to find Happyland. Follow him as he tries to define happiness with a little help from his friends, Big Wig Sophisticated Pig, Brutus Beaujolais and Cornelius Wordbook, an English gentleman with a book-for-a-head. Prince Gobbledygook duels, loses his ladylove, regains his original name and gains a friendship that will last for fourforevers. Will they make it to Happyland?

Before I really get into the meaty part of this review, can we please just stare in awe at that cover?!?!?  I am absolutely in love with it and with all of the art in this book!  Resto can start designing tattoos for me whenever he wants! It's gorgeous!

Although the illustrations could tell the story by themselves, Mekonnen did a wonderful job writing a story to give Resto something to draw.  The diction put me off from the story at the very beginning, but the more that I read, the more I understood. I felt like I was reading a different version of Slaughterhouse Five because of the way the word choice affected my understanding.  It definitely takes some willingness to be imaginative and childlike to read this book.

The novel is filled with a plethora of witty word plays.  These kept me giggling the entire way through.  I won't spoil any of them now, but I do want to congratulate Mekonnen on the ability to be so funny in such an already goofy tale.  If Mekonnen is nervous about adding flair to his writing, he did not show it in this piece!

My favorite part of this novel, and the reason this book will most likely find its way into my classroom library, is because of the wonderful morals that are presented at the end of every chapter.  Mekonnen takes the time to give not only an example, he spells out the moral for the audience.  I admire his ability to find the moral in the fun.

By far, my favorite character was Prince Gobbledygook!  He was an absolute gentleman who wanted nothing more than happiness for himself and his love.  Such a sweet guy!  Despite his positive qualities, he had a few obvious flaws.  These definitely brought his character from the page to real life.

With every favorite character comes a least favorite-Prince Hobo.  Jiminy Christmas!  What an annoying pain in the neck!  I spent a lot of time hoping that he would just shut his trap and go away.  Although that happens, it's a bit too close to the last page of the novel for my taste.

Mekonnen did a wonderful job spelling out most of the lessons he hopes to teach by this novel but there is one thing that I cannot figure out.  Throughout the novel, Lily is the only female present.  She is portrayed as a weak, aloof, and unintelligent woman who needs a man to be happy.  She is not seen as a person by the two princes, but rather as an item or a piece of property to be won.  I am not sure what Mekonnen was trying to do here.  Is this Mekonnen's way of stating that is his belief of women?  Is it simply an artistic choice to make Lily seem like the protagonist when all along Prince Gobbledygook is the important one?  Is Lily simply there to illustrate the growth that Prince Gobbledygook goes through as he seeks happiness?  I like to think that it's the latter.

Overall, I enjoyed this book!  I definitely recommend it to fans of Kurt Vonnegut Jr. and Lewis Carroll.