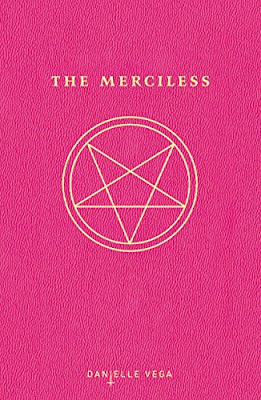 The Merciless by Danielle Vega
Published by Razorbill on June 9, 2015

Brooklyn Stevens sits in a pool of her own blood, tied up and gagged. No one outside of these dank basement walls knows she’s here. No one can hear her scream.

Sofia Flores knows she shouldn’t have gotten involved. When she befriended Riley, Grace, and Alexis on her first day at school, she admired them, with their perfect hair and their good-girl ways. They said they wanted to save Brooklyn. They wanted to help her. Sofia didn’t realize they believed Brooklyn was possessed.

Now, Riley and the girls are performing an exorcism on Brooklyn—but their idea of an exorcism is closer to torture than salvation. All Sofia wants is to get out of this house. But there is no way out. Sofia can’t go against the other girls...unless she wants to be next.

By the shockingly twisted end, readers will be faced with the most haunting question of all: Is there evil in all of us?

The Merciless is definitely a difficult book to review.  After all, it was everything I expected it to be. Each of the reviews that I read likened it to Mean Girls and those reviewers were most definitely not exaggerating.

Let's start with the positives.  Vega definitely pays attention to detail!  She wants her audience to feel the mental pain and physical anguish the characters go through, and she does not spare any effort, verb, or adjective in this endeavor.  I was truly impressed with her writing style in this area.

However, I did not enjoy this book very much overall.  Many of the characters felt rushed and underdeveloped and even though I just finished this book a week ago, I remember very little of the plot.  I remember enough to know that I would not purchase this series for my classroom library as many of the parents would be upset by the graphic violence and religious themes.

Many of the reviewers who spoke about this book mentioned the surprise ending.  I'd like to take a moment to do exactly that.  The ending is the part of this book that I remember the best.  The insane character development and added suspense delighted me.  Despite these positive portions, I cannot ignore the fact that the ending seemed too drawn out and felt too easily pulled together.  It was as if Vega was so exhausted by her efforts to create imagery that she was unable to create a terrific denouement.

In fact, the ending of this book encouraged me to give the second book in the series a chance.  I made it through 109 pages before I chose to DNF.  This was largely because I felt that, again, the characters and plot were underdeveloped and flat.

I would recommend this book to fans of Mean Girls and to individuals who are seeking short term, thoughtless entertainment.