Roza is a mixed-up kid. Eighteen years old and on the threshold of adulthood, she feels powerless in the face of a world that hasn’t adequately prepared her for adult life. She is riddled with anxiety about the world’s problems, the problems of her classmates at an inner-city high school in Corona, Queens. As an American of multicultural heritage (Polish-Jewish on her mother’s side, Venezuelan on her father’s) she struggles to find her place in society where the odds are stacked against people like her.


At the outset, she is on an airplane heading to Warsaw – the city of her ancestors, a city she’d never been to before. The city her mother had fled from in the 1980s because of an article she’d written that had offended the authorities. Roza’s voyage is a kind of reverse immigration – she’s escaping from America back to Poland because of a student protest that ended in tragedy. She alludes to the protest and its bloody end throughout the novel, with flashbacks tormenting her traumatized mind to the very end. When she arrives in Warsaw, she struggles to come to terms with what happened and what part she played in the tragedy. She grapples with the concept of guilt and blame – were the students to blame for what happened or was it the fault of overzealous police? She weighs how fear quells courage in an oppressive society. She confronts the grey reality of post-war Warsaw and realizes that there’s very little of it that she can identify with. She retraces history’s steps through the Polish capital and the former ghetto of WW2.

Her longing for home is visceral, reflected in the flashbacks of school and relationships that are woven through her daily existence. Flashbacks that reflect the absurdity of the inner-city high school experience, where kids are meant to learn an inimical thread of history that has little to do with their own reality, that places many of them in the position of the conquered and exploited.

Queen of Corona is a look into the inner life of the inner city. A foray into the mind and heart of a young woman on the cusp of adulthood, torn from her destiny because she dared to stand up and speak up for those who don’t have a voice. A glimpse inside the hopeless hallways of New York City’s failing public schools. It is a coming-of-age novel in a tumultuous time. It is a lesson on how fear is the most dangerous aspect of our Trumped-up existence.

I received an eARC of this novel from the author in exchange for my honest and unbiased review.

Reader beware: This book will make you uncomfortable.  This book will make you question what you think you know.  How do I know this?  Because that's what it did for me. I'll admit it, I'm Minnesota Nice.  I believe that all people, especially women, should have the utmost respect for themselves.  It was absolutely heartbreaking for me to read a novel where the protagonist sees anything but herself as worthwhile.  What hit even closer to home, however, is that I do teach at a low income school.  That I do work with students that I am positive see themselves and the educational system the same way that Roza does.  Personally, I try to make school relevant to my kids.  But, I know that's not all of us.  I know that it's hard to think of tomorrow when you aren't sure where tonight's meal will come from.  This book definitely points out what's going wrong.  It's not all sunshine and roses.  But I think it's what we, as a country, need to see.

As for character development, I loved Roza as much as I wanted to scream at her.  She is a headstrong and determined young lady who I admire for standing for her beliefs.  However, I wish she demanded more respect for herself.  Too often, I found her putting herself into compromising situations only to be surprised by the way things ended.  Honestly, I want to grab her, shake her and scream "What were you thinking!?!?!?!" So, kudos to Esterhazy for writing such a believable and antagonizing protagonist.

Overall, I hated the writing style of this novel.  I liked that Esterhazy took the time to write as Roza would think, but it was difficult to follow the timeline which took a lot of the joy of reading this piece away from me.  I like to know when in the timeline I am, even if I'm in a flashback.  Maybe add some dates or a small mark to let the audience know that they're headed into, or out of, yet another flashback.

The ending made me so angry, I actually screamed at my Ol' Man when I was done.  I can't say much without spoiling it, but I wanted to cry.  It's possible that what upset me the most was how fucking realistic it was.  It hits ya right in the feels because you know it's real. 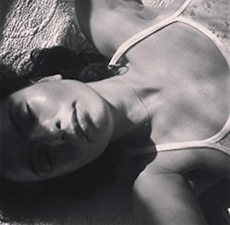 Author Bio:
Esterhazy is a journalist, writer and translator. A native New Yorker, she holds degrees in Comparative Literature from New York University and American Studies from the University of Warsaw. Queen of Corona is her debut novel.