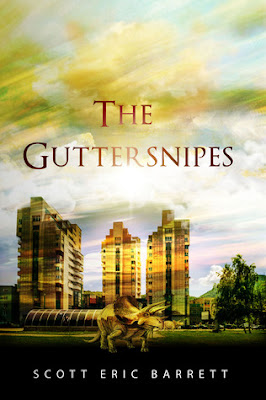 I received a copy of this novel in exchange for my honest and unbiased review.

Charlie Daniels is more than six feet tall, allergic to almost everything, and has a pet dinosaur at home. His life in Arizona is relatively normal. That is, apart from the nightmares Charlie has...

But when his dinosaur, Trike, gets kidnapped by a strange old lady and her cat-like sidekick, Charlie and his misfit friend Arty are sucked into a story bigger than both of them. Risking everything to rescue Trike, Charlie and Arty are flung into the past, landing in the chaos of New York City, 1865.

Dodging the mysterious Nasten Cobblestine, and avoiding the perils of New York's nastiest street cleaners' strikes, test Charlie's wits as well as his courage. All he wants to do is reunite with his dinosaur and somehow find a way back home...

As Charlie searches for Trike, he draws dangerously close to P.T. Barnum's eerie museum and the creature that lies within. Will he find Trike and get home alive? And who is the Ice Lady of his nightmares?

This book is truly difficult to review.  There were so many things that I liked!  However, there were also several things that I truly despised.  In the interest of being honest, let's talk about the positive and negative aspects separately.

I enjoyed how fast-paced this book was.  I think that middle school readers would truly enjoy it.