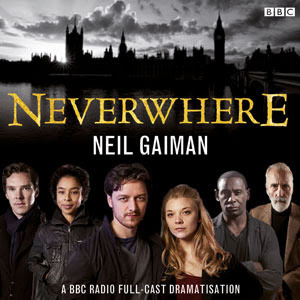 Beneath the streets of London there is another London. A subterranean labyrinth of sewers and abandoned tube stations. A somewhere that is Neverwhere.

An act of kindness sees Richard Mayhew catapulted from his ordinary life into a subterranean world under the streets of London. Stopping to help an injured girl on a London street, Richard is thrust from his workaday existence into the strange world of London Below.

So begins a curious and mysterious adventure deep beneath the streets of London, a London of shadows where the tube cry of 'Mind the Gap' takes on new meaning; for the inhabitants of this murky domain are those who have fallen through the gaps in society, the dispossessed, the homeless. Here Richard meets the Earl of Earl’s Court, Old Bailey and Hammersmith, faces a life-threatening ordeal at the hands of the Black Friars, comes face to face with Great Beast of London, and encounters an Angel. Called Islington.

Joining the mysterious girl named Door and her companions, the Marquis de Carabas and the bodyguard, Hunter, Richard embarks on an extraordinary quest to escape from the clutches of the fiendish assassins Croup and Vandemar and to discover who ordered them to murder her family. All the while trying to work out how to get back to his old life in London Above.

I have never looked forward to listening to audibooks.  I simply have neither the patience nor the attention span for them.  When I saw that this version of Neverwhere had been released, I simply had to give it a shot.  I first tried listening to it in 2013 when it originally aired.  Despite my love for the novel, I fell asleep.  I tried again in 2017, but failed again.  2018 led to me spending hours upon hours in the car with several road trips each month.  Music started to get a little boring because almost EVERYTHING was overplayed.  I decided to give audiobooks another shot.  I am so glad that I did!  Not only did I finish Neverwhere, I began listening to more audibooks and am now able to enjoy so many more books!  All thanks to a lot of quiet hours on the road with my dog.  And, by the way, Rascal enjoys listening to audibooks too.  I can see his ears perk up when I hit play.

When I started listening to Neverwhere, I was already familiar with the story.  It's one of Neil Gaiman's most wonderful works!  BBC did an amazing job bringing it to life.  I was so impressed by not only the voice actors, but the sound effects.  Instead of merely having the story read to me, I was immediately immersed in the action.  I was there.  I was surrounded by the battles and deaths and betrayal. BBC chose the best actors for this piece!  James McAvoy plays a wonderful Richard Mayhew.  He simply has the clueless and lackluster voice needed to play an ordinary man in extraordinary situations.  Likewise, Benedict Cumberbatch's solemn and menacing voice brings Islington to life.  I will definitely be on the lookout for more BBC productions.

While I could happily spend this entire review discussing just how amazing it was to listen to BBC bring this novel to life, I believe it's imperative that we talk about the novel itself.  To begin, let's talk about some of the amazing characters.  By far, my favorite is Door.  I admire her independence and quick thinking.  She is a truly empathetic character who looks out for the best result for everyone around her despite having necessary tasks to complete for herself.  Such a strong woman deserves to be admired!  But then, there's Hunter.  What a terrific foil to Door!  Her physical strength and looming presence terrify others and create a legacy for her, but she is more likely to turn a friend to a foe than help another person.  She cares only for herself until the very end.  In her last moments, however, I don't believe that she truly redeems herself even though she tries to do exactly that.

This BBC Dramatisation brings Gaiman's skill as a master world builder to life.  London Above and London Below are very diverse places with very different players.  This dramatisation demonstrates and exaggerates these differences so that the casual listener can enjoy them as well.  This is true down to the diction of people from both places.  For example, the people from London Below tend to be more comical and they enjoy life.  Those from London Above, on the other hand, take life far too seriously.  Perhaps this is because those of London Below are far too aware of just how short life is.  They want to make the absolute most of it while the people of London Above are more interested in living the way they are told to.