Review: Home of the Brave by Katherine Applegate 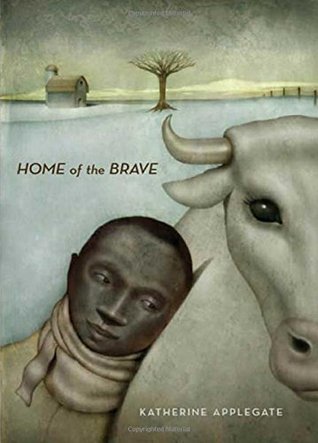 Home of the Brave by Katherine Applegate
Published by Feiwel & Friends on August 21, 2007

Kek comes from Africa. In America he sees snow for the first time, and feels its sting. He's never walked on ice, and he falls. He wonders if the people in this new place will be like the winter – cold and unkind.

In Africa, Kek lived with his mother, father, and brother. But only he and his mother have survived, and now she's missing. Kek is on his own. Slowly, he makes friends: a girl who is in foster care; an old woman who owns a rundown farm, and a cow whose name means "family" in Kek's native language. As Kek awaits word of his mother's fate, he weathers the tough Minnesota winter by finding warmth in his new friendships, strength in his memories, and belief in his new country.

Home of the Brave is a 2008 Bank Street - Best Children's Book of the Year.

I am definitely becoming a big fan of Applegate's writing!  I love that she finds ways to address important issues in ways that can be easily understood by younger students.  She not only teaches children about these issues, but finds ways to encourage empathy.  I think this is a phenomenal way to encourage our youth to become caring members of society.

I loved that Kek is such a complex character.  He wants to learn and he is so grateful for his new place in Minnesota.  In fact, he is so truly thankful for most things that are generally taken for granted.  Although he is overwhelmed by all that is new and exciting, he strives to hang on to the ways of Sudan.  He wants so badly to be considered a man by his people.  He wants to care for cows and be kind to people.  He is a strong little guy going through challenges that would be hard for most adults.  The fact that he takes it all in stride and does his best with every situation is absolutely inspiring.

I can't say that I had a least favorite character in this book.  However, I would have loved to have heard more from Ganwar.  He was definitely the strong and silent type, but something was eating away at his insides.  I would have loved to see him get a little more resolution as well.  I know that sometimes in life, that resolution just isn't coming.  Perhaps that was the point Applegate wanted to make here as well.

Overall, I absolutely devoured this book.  As a verse novel, it was a quick read.  It was a very meaningful read, however.  I definitely think that a lot of the substance and poignancy would have been lost if it had been in prose form.  I look forward to reading more from Applegate!