Review: The Mosaic by Chris Keaton and Rick Taubold 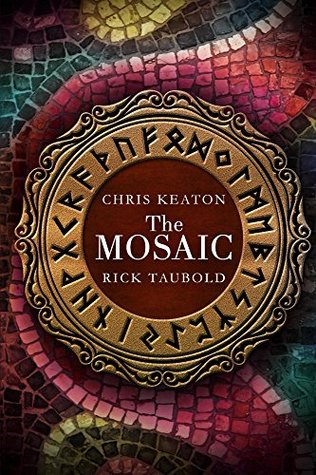 The Mosaic by Chris Keaton and Rick Taubold
Published on July 12, 2017

Twin girls discover a mystical world contained within a crumbling mosaic, and they must restore it before an evil witch seizes its power, even if doing so could tear their family apart.

Secrets. It all started while looking for secret passages. Chloe Tozier’s impulsive twin, Zoe, insisted that all old mansions had them. Grandma denied the existence of any here. Except for the boarded-up service elevator that she conveniently forgot to mention before the girls discovered it, the elevator that didn’t seem to go anywhere. They had been living in this private museum with their grandparents since the death of their parents during an archaeology trip to Egypt.

Mysteries. Why have a museum in a tiny town in the middle of Kansas when what’s on display is nothing unusual? Sometimes packages arrived wrapped in plain brown paper that the girls never saw again. Grandpa disappeared overnight and they haven’t heard from him since. And before going to Egypt their parents had mentioned something about a mysterious mosaic. Maybe Zoe was right about family secrets. Maybe it was time to dig further.

I really liked this book!  I had it on my TBR for a long time, but I just hadn't gotten to it.  Now that I have, I'm pretty excited that I did!

Chloe Tozier was a phenomenal character.  She was someone that I could easily relate to as a curious bookworm.  Although she has a twin, she's just more believable.  I can't think of anyone as fearless or as reckless as Zoe Tozier, but I can think of several people who are as reserved and cautious as Chloe.  Together, they make a fabulous team because they balance each other out.

The world-building in this book was done excellently as well.  I loved that I could picture each place that the girls visited to retrieve pieces of the mosaic.  The descriptions of each of the mythical creatures came to life in very vivid ways.

Unfortunately, I felt like a lot of the action was rushed through.  A lot of time is spent bringing Dahwen to the mosaic.  Once she arrives, however, the battle ends rather quickly.  I think that it would have been a huge improvement if the authors would have brought some more description to the battle.  The audience is so invested in the characters that it would have kept us on the edge of our seats were there more details.

Overall, I thought this was a really good book!  There were parts that made me want to cry and others that I thought were absolutely beautifully written.  I look forward to seeing what Keaton and Taubold give us next.