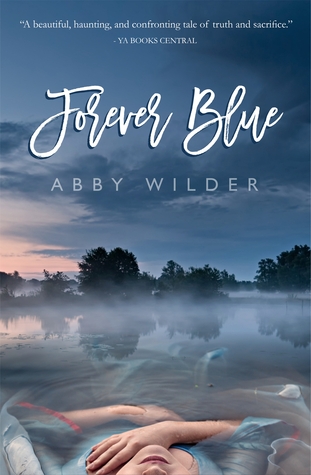 GoodReads Description
I broke the surface and gulped in air, running my hands over my face to push the water away. A raindrop splattered on my cheek. He did not rise. Seven more raindrops in quick succession splattered against my skin. And still, he did not rise. The heavens opened and rain fell like a sheet, blanketing me, cutting me off from the rest of the world.
I thought it was the end of everything.
But I was wrong.

Brothers, Ruben and Judah Mitchell, used to be close, but that was before they met Cara Armistead. Once she moved in next door, the brothers grew further and further apart until the tension between them led to an event which left one dead and the other branded by the aftermath.

One year later, after the death of her baby brother destroyed her family, Lennon Donnelly has moved back to her home town of Puruwai. While visiting the cemetery she finds a boy sitting on a gravestone, a boy with secrets in his past, but someone who finally sees her. Accused by the town as a killer, he reaches out to Lennon, but as their relationship deepens, the events of the year before present themselves in a way no one could have imagined.

In this compelling ya romantic mystery, Forever Blue tells of the intertwining relationships of Lennon, Ruben, Judah and Cara. Spanning over two years, Abby Wilder creates a story of intrigue and suspicion that will haunt you long after you turn the final page.

This story contains mild use of strong language and references to underage drinking and smoking.

My Thoughts
WOW!  What a book!  I am honestly not sure what I want to write about first!  This is going to be a difficult review to share because I honestly just want to tell you EVERYTHING so that you can share the experience with me..but it's more fun if you read it. Here....we...go!!!!!

In this novel, the story follows Lennon.  My favorite character, however, was Judah.  It takes a strong and solid person to shoulder as much as he does and I think that Wilder did a wonderful job of writing him that way.  Besides, I think I developed a fangirl crush..*swoon* I really liked Lennon's character as well, I just thought that there was more depth to Judah than there was to Lennon.  That was weird for me because Judah isn't our main character.

My least favorite characters were ALL of the parents.  I cannot imagine living a life with parents who are so distant.  It may be my teacher mind kicking in, but as these kids are out drinking and partying, don't the parents wonder where they are?  I mean, Judah keeps beer in his bedroom!  My parents would have cleaned the floor with me if that had happened when I was in high school!  How do these parents think that's OK? Or do they not check?  Or am I just old fashioned?  Who knows...

As soon as the twist came in at the end, I was so wide eyed that I was afraid I was going to have to sleep with both eyes open. I have never been so surprised that I wasn't sure I would ever be able to shut my eyes again!  WOW!  I SOOOOOO DID NOT SEE THAT COMING!  I am so impressed by a writer who is so talented that she can pull a twist like that out of goodness only knows where and still have it make complete and total sense!  I don't think amazing is a good enough word for such skill!

If you are still reading this, why haven't you gone to Amazon and bought this book yet? Here!  Let me help you!  Just click right here!

Author Bio
Abby grew up on a sheep farm at the bottom of the world.

A love of reading has remained constant in her life, and when it occurred to her that she couldn't imagine anything better than being a writer, she set out to achieve just that.

Girl Behind Glass, Boy in Uniform & Girl Beneath Stars are available now, and Forever Blue was released June 17th 2016