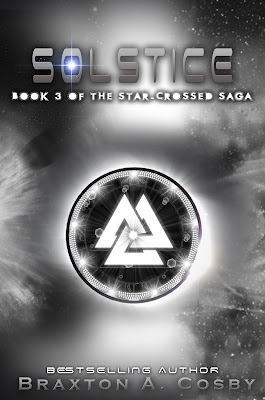 What You Believe, Can Destroy You!
William and Sydney have sacrificed everything to fortify their love, so much so that William dares to brave the depths of space to find a cure for their deadly Supernova bond, leaving both her and Earth vulnerable to Torrian Alliance attack. But with a full scale rebellion in play on Fabricius, the reality of Sydney’s execution from Torrian hands is diminished, only eclipsed by the certainty of a more threats – The Third Faction and The Dagmas Clan – lead by Dominic and his insurgent recruits. With overwhelming odds mounting against them, William makes a desperate attempt to find the last of the endangered Star-children only to be captured by a new menace, where he is forced to compete in the dreaded Gauntlet of sport. Allies surge to free Fabricius, seeking alliances across the galaxy while Sydney tries to keep her identity hidden and trains to master the third phase of her Star-child evolution: Solstice. With Sarah’s mysterious return home with clues to unlock the future, Noella’s training and Bill’s symbiotic development hope is restored, but will it be enough to unite the galaxy and destroy evil for once and for all?

****IT'S FINALLY HERE****
The finale to my award-winning series, SOLSTICE: Book 3 of The Star-Crossed Saga. Already endorsed by NYT Bestselling author Adriana Trigianni, "Solstice turns up the heat! Book 3 of The Star-Crossed Saga will thrill young readers who love science fiction everywhere. Braxton Cosby has created a dystopian world of original characters that are imaginative and daring, courageous and compelling. Three times is a charm!"
Grab hold of this final book of the trilogy!
BOOK LINK: https://goo.gl/Wwb4jn
AMAZON LINK: https://goo.gl/uX8Iaq

Previous books in the series (click on images for Goodsreads links):

ENDORSEMENTS FOR THE STAR-CROSSED SAGA:

"The Star-Crossed Saga is daring, exciting and romantic. It's an imaginative science fiction adventure, chock full of memorable characters, including the smart and alluring Sydney, who will inspire girls everywhere as they navigate the tricky waters of teen hood. Braxton Cosby's debut delivers."  -Adriana Trigiani -- New York Times bestselling author

"Braxton Cosby's stories feel personal and well thought-out. I'm happy to welcome this entertaining writer to the YA science fiction field. I look forward to more of his work!”  -Tananarive Due, author of My Soul to Keep

“Even an eternity of travel may fall to emotion…ProtoStar is a blend of science fiction and romance…a unique spin of the doomed love, very much recommended.”  -James A. Cox – Midwest Book Review

"This Young Adult Sci-Fi book has it all: romance, innocence, mystery, intrigue, prophecy and adventure. ...Cosby writes like a seasoned author and I look forward to the next installment in this series."   -Anne B. Readers Favorite

"...a magnificent start to an inventive series by a talented debut author...strong prose is appealing, engaging and well-written. His characters glimmer like the sun...a cinematic literary epic adventure."  -Blogcritics

“...a really intriguing story that encompasses action, adventure, romance, drama and a measure of science fiction that helps make this multi-faceted book a very engaging read. Ending skillfully with a suspenseful cliffhanger, this book, with its well-developed characters and many surprising twists will leave readers anxiously waiting for the next installment in the Star-Crossed Saga.”   -Literary Classsics 5/5 stars

eXCERPT:
CHAPTER THREE
Sydney and Noella walked hand in hand along the small winding path leading to the top the Mount Dothan. The dusking sky painted a sheet of orange and red light across the woodsy terrain around them, giving the impression of wading through a sea of fire. Amid the grim moment of the day and the burning sensation rising in Sydney’s throat, the tone seemed fitting. Silence accompanied them, and it wasn’t until the pair hit the peak that Sydney finally broke the ice. “So what do your people call this ceremony?” she asked.
“The time of the harvest. It’s the moment when a fallen soldier is said to join the being of the sky. I think humans refer to it as God,” Noella said, her tone as flat as the expression on her face.
“Sounds cool,” she replied as she surveyed the surroundings; a patch of flatland that housed a family of hawks who watched cautiously from above in a lone cedar tree. From here, every inch of Madisonburg could be observed without the need of telescope or binoculars. A bed of dandelions and weeping willows greeted them in the center of the field.
“This way. I’ll show you where I buried his body,” Noella said.
She could see that Noella was visibly shaken, slowly unravelling before her eyes. Her hands trembled as her eyes began to redden. She wondered how long it’d take, amazed at how Noella had not said a word since Arrion’s death a few weeks ago, only morning him in silence, which she explained was customary on Fabricius. She had done the deed all by herself, refusing to allow Sydney to assist in his burial. From scouting the plot of land to digging the hole, Noella insisted that it was protocol on her planet for a lone fellow soldier to be assigned the arduous task of preparation. Seeing as though William had departed soon after, there was no better candidate left for the job.
She took Noella by the hand and drew her close, giving her the most delicate and firm hug she could muster. Noella stood motionless, sinking into her friend’s embrace. After a few seconds, she released her, unable to make eye contact. “I’m here for you,” she murmured.
“Thanks, Syd,” Noella replied, her voice ragged.
She finally looked up at her and gave a nod, following Noella’s lead over to the place where Arrion’s body lay. Surprisingly, the disturbed clay seemed more settled than she expected, dried from the sun and already showing signs of life as Bermuda grass had slowly began to encroach along the edges. A makeshift tombstone had been erected, fashioned from metallic fuselage scraps of the Daedallus, with only Arrrion’s name and handle tatted along the surface, minus dates to hide his identity to hikers in hopes that most consider it a memorial to a lost pet if they stumbled upon it.
Noella knelt next to the grave, slid her backpack from her shoulders and began to open it. Searching her bag, she retrieved a small oval-shaped disk and a satchel filled with purple powder. “These are crushed lilacs pedals. We must first prepare the path for Arrion’s ascension by sending tribute to the sky.” She stood and sprinkled a few handfuls over the grave until a thin layer had materialized before them. “On our planet we usually use the oil of a Tonosia Tree, which is a lot thicker substance and is used for sterilization. Sarah thought it’d be a good idea to use lilacs as a substitute because it was a similar color.”
“It’s beautiful,” she replied.
“I will now begin the ceremony.” Noella placed the disc in the center of the burial site, depressed a red button on the top and came to her side. The two joined hands as the disc began to spin and dig into the hardened clay. Noella pointed a hydrogen phaser at the site and fired a stream of fire upon it that scorched the sheet of crushed pedals. The disc disappeared beneath the flames and Noella broke out into song, in an alien dialect that Sydney could not understand. It was less about the words and more the moment that choked at her, forcing the tears to flow freely down her face. She squeezed Noella’s hand as she crooned on. By the time Noella had finished, a small fissure had opened in the place where the disc had entered and a cloud of embers swirled into the air; a mix of red, orange and yellow. It lifted high into the sky and faded into the clouds.
Noella dropped to her knees in a whimper. “It is finished.”
Sydney came beside her and held her close. “It was… beautiful.”


The two sat in silence with only sobs to drown out the sounds of the forest.

About the Author
Multi-Award Winning and #1 Amazon Bestselling Author Braxton A. Cosby creates vivid, original stories that focus on relationships and world building that brings characters to life. Braxton received a lot of his inspiration from watching the accomplishments and exploits of his famous uncle, comedic legend Bill Cosby. Braxton is the CEO of Cosby Media Productions, a full-service entertainment studio that focuses on producing content in the areas of television, film, and print media. Braxton is also an actor and radio show host. As a writer, Braxton’s novels explore the psychology of human connection, concerning themes of trust, faith and selflessness. He resides in Lawrenceville, Ga with his wife and a scruff Morkie named StarKozy.