Growth and Change are Highly Overrated: A Review 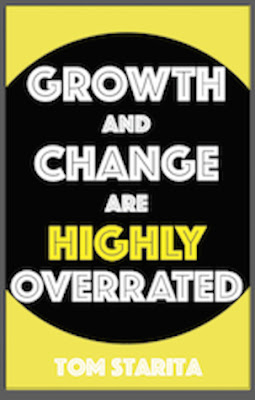 Growth and Change are Highly Overrated by Tom Starita

I received a copy of this book from the author in exchange for my honest and unbiased review. I would not suggest this novel for anyone younger than seventeen due to language and sexual content.

Growth and Change Are Highly Overrated is a classic coming-of-age story that takes a unique and comic look at what we all fear— having to grow up and abandon our dreams.

For a charismatic man like Lucas James, life is a breeze because everyone else provides the wind. This man-child front man for a mediocre cover band has been mooching off of his fiancée Jackie for years until she finally decides she's had enough. Faced with the reality of having no income to support his carefree lifestyle, Lucas James abandons his principles and gets a job working in the stockroom at, “That Store.” How does he cope with this new found sense of responsibility?

In a life spent bucking authority how will Lucas James deal with his manager, 'Victor the Dictator'? How long can he survive Ralph, a starry-eyed coworker who desires nothing more than to be best friends? Will Lori, a twenty-something cashier, be like everyone else and fall for his charms? Will he ever find a place to live? And is “growing up” just another way of saying “selling out?”

With this hilarious and engaging novel, author Tom Starita perfectly captures a character we have all met and perhaps some of us know all too well.

It's time to review this book.  Oh, boy.  This will not be easy.  I have been trying to find the words for it since I finished the book on Sunday.  Did I enjoy reading it?  Yes!  Did I think it was a realistic novel?  Definitely!  Did it make me lose faith in humanity, want to tear my hair out, and cry?  Oh, yeah, that too.

After hours of thought and headaches, I finally realized what Starita did with this book.  I could only conclude that the little stinker had forced his audience to see that no matter how badly we want others to make the correct decisions, they won't.  We have to do that.  I hated the ending of this book, until I figured it out.  Some people don't change.  Some people would rather screw over the other guy before ever following a moral compass.  And then, there are people (like the ones who choose to read this book) that would make the right decision.  Starita may choose a striking and unorthodox way to do it, but he is using an apathetic dick (his word, not mine) to encourage mankind to take a deeper look at their morals, values, and decisions.

I loved Starita's conversational writing style.  There seemed to be no division between the words on the page and the character that I could so easily imagine was sitting in the room talking to me.  This shows not only the ability to write, but to write well.

Starita also had a firm grasp on characterization.  He knew what he wanted his characters to be doing and their choices always made sense.  This was true for every character in the book, no matter how large or small their role was.

Lucas James.  Mr. Starita, if you're reading this, I'm sorry.  I hated your main character with a burning passion.  I can't believe that anyone can be that rude, selfish, or evil.  Then again, I also know a few people like that.  I wish I could have seen a larger change in Lucas James, but I think that would have been an unrealistic option.

Although I enjoyed the flashbacks that allowed me to learn more about Lucas James' background, I felt that they were too often and sometimes lacked connection to the rest of the story.  The plot would have been much easier to understand if the story took on a more linear plot line.