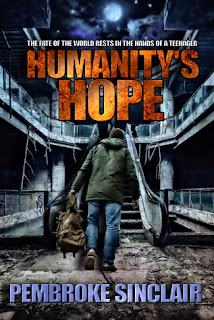 I received an eARC of this novel from the publisher in exchange for my honest and unbiased review.

GoodReads Description
Caleb, a 17-year-old boy, survived the zombie uprising, but he didn’t come out of the ordeal unscathed. He’s been scarred—both mentally and physically. The rest of humanity is trying to rebuild, to make the world normal again. Caleb is trying to return to a normal life also, but after all he’s seen, after the loss of his family and friends, the transition is difficult. The darkness that led him down a path of self-doubt and self-harm keeps trying to creep back into his mind.

Things only become worse when he discovers he’s immune to whatever makes a zombie a zombie. Fighting zombies was predictable. He knew what to expect. Fighting humans is volatile. They are malicious and treacherous. They won’t stop to get what they want, and Caleb has to figure out exactly what that is.

Caleb was a wonderful character!  I definitely felt the pain he carried with him.  His past was evident in the ways that he carried himself and considered his surroundings.  I don't believe that this story would have been nearly as scary in some parts if Sinclair had chosen a less intelligent MC.  Instead, we are given the wonderfully developed Caleb.

The zombies were very vividly described! Usually, gross descriptions in books are something I can overlook as I am not actually faced with the picture.  Sinclair does away with her audience's ability to do that! I was forced to see them in my mind's eye and be faced with exactly the same things that Caleb was faced with.

The ending  was not what I expected.  I won't spoil it for anyone, but I REALLY think that could have been handled much better.  I felt that the ending was rushed and that Sinclair used a terrible ending on a terrific book.  There were small clues that it would end like it did, but nothing that was substantial enough to feel satisfying.

Several questions went unanswered. Why is he immune? Why is he actually running?  Why are characters that don't matter to the plot constantly brought up?

Let's Chat
Do bad endings spoil a book for you?  What do you like about zombie books?  What are your thoughts on Sinclair's other works?