I am excited to share a guest post by Euphrates Moss.  In case you missed it, I reviewed his book Telos and Other Psychographs several months ago.  If you are interested in what I thought, you can find that review here.

Today, Moss joins us to tell about his adventure as a writer.  I am looking forward to reading your thoughts on his essay, "From Nobody to Writer," in the comments below.

Just Who is this Euphrates Moss Character? 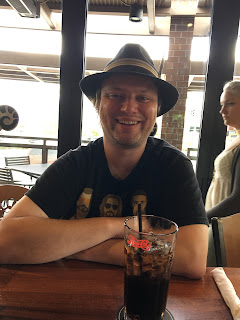 Euphrates Moss attended Bellevue College, Portland State University, and Seattle University. He currently holds a B.A. in English/Creative Writing from Seattle U. Don't hold it against him. He currently hosts a podcast that has absolutely nothing to do with his poetry under a different name.


From Nobody To Writer

Sometimes you can see much better-
When observing things obscure,
To look upon them indirectly...
Than to watch them all the more.
-2008

Hanging Garden Flower
Ah! he is not a common man
Who turns to a flowerless tree.
-Onitsura

Many leaves reside within her garden
Many leaves, indeed; many
Across the breeze the gray river
Golden Bridge, and lady’s laughing faces
Many leaves, many slender: many
All possessed of a smothered envy

Sweet but for the flower…
With its boisterous oranges, yellows, and indigos
The blossom standing neatly in the sun
Who would blame the keeper for a peak while on the run
A cricket lands gently upon his fishing line
Now, the blue moon watches soundly

Snow white-capped mountains shift restlessly behind
A glimpse will catch, most assuredly
The willows sing what the wind ordains
While the pond’s low notes support in harmony
Her fringes sway askance within the wind
A late afternoon nap tucked between the folds

The blue plums taste so good this evening
The color of your eyes tantalize- I am mesmerized!
What if the moon saw your face?
Knowing distance wide your beautiful name
The swirling eddies only enhance the aura at once
And once again once I saw you again once
Apricot boughs and ferns seem as nothing

The pulchritudinous ever multitudinous
Now you’re being rude with us, please
Speak straight don’t placate aggravate
Crazy eight it with a bottomless tease

Some harlequin harlot turned her face out real scarlot
Said, “Varlot, I’ve got swing and sass.”
I stepped into the spotlight not sure if I’m cockright
And spun my wheels with the gas
Where little Bopeep got it on with a creep
“What’s wrong, soldier, ain’t you doing fine?”
So I turned her loose like she’s tied to a fuse
Said, “Sorry, I ain’t your kind!”

Somnambulatory with a different kind of story
In the laboratory glory of me
Steel trap where that moose cap brain fapped
Gets slapped, is where I’d rather get free

The jack of all trades backed an ace on my spade
With a lady he laid so I caved
His head spooled dead with a tool from the shed
Made his bed and then I said, “Close shave.”

That hit off the snowcone frost bit in the blowzone
Made me sit and then slow groan in bliss
That ship that has left slipstream real bereft
By a meaningful theft, it took the piss

A Response To The Imagists

i.
There are times I wish I could disappear
Completely when trouble with existence
Butts against for maximum resistance–
That is, trouble owning, operating
Chance relates myself to world t’would appear
Quite real-ly has me in its grasp for killing

ii.
The mitochondria within my cells
Has not sufficient power for my health
Nor my particles bear magnetic wealth
To keep together my own substance pure
Disintigration from within a shell
It seems such more than any could endure

iii.
From such a state I never could come back
Or so I worry, so I don’t let go
I keep to what I am and what I know.
To think I’m trapped within this mortal coil
It makes one feel a dread akin attack
Like some old Jew would snuff your burning oil

iv.
But here I lie awake within my bed
Or else submerged in water in a tub
Not to be determined by bitter rub
Of e’en so much as my foremost desire:
I dearly want to vacate any stead
In every pan I feel the flicking fire

v.
I swear a storm, I shit a liquid spray
I feel my anxiety around folks,
Them bending out of shape all my wheel’s spokes
I’ve overdosed and soon I may yet die
I don’t know when to shut up when I may
Should now…? Right now? I…


[1] People who aren’t artists don’t understand the need for bad behavior in artists, but only non-artists exhibit this bewilderment at our behavior. Us artists can’t explain it to the rest of the populace. We would if we could.
a Rafflecopter giveaway
Posted by Jessa Julian at 1:11 PM