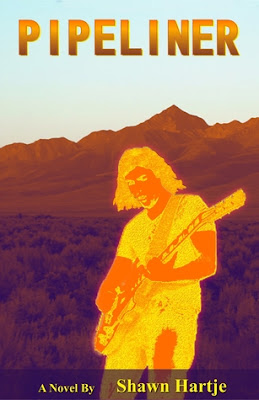 I received an ebook of this novel from the author in exchange for my honest and unbiased review.  Due to sexual and drug related content, I do not recommend this book to anyone under the age of 17.

For seventeen-year-old Jason Krabb, high school life in 1990s Idaho is a world of cargo shorts, cassette tapes, and junk food. Plagued equally by algebra and puberty, Jason sets out to find a girlfriend and become a rock guitarist. His quest is irreversibly jolted when he attends a bonfire and meets an alluring girl from the other side of town and a rag tag crew who are bringing gas lines through the desert in order to keep the lights on in Portland and Seattle, places where Jason hopes to find his nirvana as a guitarist.

Meanwhile, things deteriorate at home. Jason's pediatrician mom, Leah, sadly faces the twilight of her parenting years while his father, Curtis, contends with the enormity of running a big ticket research laboratory and coming to terms with his son's wayward path.

Pipeliner is at once a coming of age love story and a comical timestamp of early 90s family life. Set in the fictional Idaho town of Helen Springs, pop. 58,000, its characters are as vibrant as the lofty peaks and purple sunsets of the high desert. Here we find rich farmers, poor ranchers, dutiful Mormons, government honchos, disgruntled vets, drug-dealing bruisers, irksome teachers, and spirited students, all doing their best to keep the lights on.

As a woman, I know what puberty is like on the feminine side of the fence.  Of course, I've heard about the other side, with its wet dreams and awkward spurts of hormonal confusion.  Thanks to Pipeliner, I'm one of few women who can honestly say that they have gone through both sides.  When Hartje sets out to write a coming of age story, his goal is to do so in every sense of the word.

At first, I was a bit put off by Jason's poignant pecker preoccupation.  I actually wrote a note to myself that "I'm stuck between being excited about how realistic Jason is and having heard enough about his penis."

Strangely, I adore strong characterization and it took me too long to realize that what I was upset with wasn't the fact that the pecker was strong with this book.  It was actually that I had a hard time confronting how frigging real this book is.  No one likes to read about teenagers having sex.  No one wants to hear about kids using cocaine, marijuana, or alcohol.  But they do. Even though this book is set in the 90s, many of the kids I teach have struggled with similar issues.  It's just as true in 2017 as it was in the 90s.  *Insert round of applause for Hartje's stunning realism.*

Before I started the book, I read several reviews that mentioned reading this book was like entering a time capsule.   Therefore, I spent a lot of time reading this book trying to find an anachronism.  I came out with empty hands.  This time capsule is definitely filled with strong world building and beautiful characterization.

Hartje obviously spent time developing each character.  If he hadn't, they simply could not be so realistic!  I love seeing the discrepancies between Robert and Jason, Leah and Curtis, and even Bill and Curtis.  Many novels portray families as a close knit group, filled with love and no negative words.  This book, just pulls apart the idea of a loving family to show you the crap it's filled with.  In doing so, Hartje demonstrates what it really means to love your family through the good and bad times.

There is a point in this book, that Leah (the mom) allows Jason to go off with people she thinks are trouble.    I had a huge issue with this part.  Growing up, if my Mama didn't like you, she didn't hide it.  I knew it.  You knew it.  We didn't hang out.  She was determined to make sure we were safe at every point in time.  It's hard for me to imagine that Leah would allow her son to put himself into such a hazardous position, only to be upset when he made the wrong choice later on.  Yes, it is important that she trusts her son.  However, what has he done to deserve it?  Has he been trustworthy?  No.  Has he been getting in trouble?  Yes.

Overall, I believe this was a truly thought-provoking novel that is meant to encourage us to think about the present by observing the past.