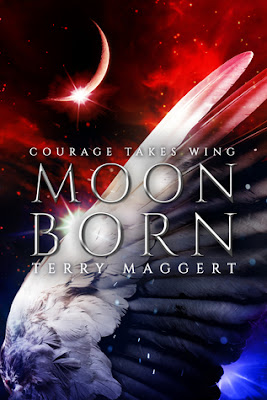 Livvy Foster has a new heart, home, and a place in the powerful halls of House Windhook. The fall of Sliver was only the beginning of a civil war that sees angels from across the sky challenge each other to lead a world in which the past and the future are connected by a storm crafted from time, ambition, and power.

When House Selinus attempts to bend the light of days in order to become the supreme power in an apocalyptic future, they confront a goddess who is older than time itself-- and she'll stop at nothing to get the one soul who escaped her deadly grasp: Livvy.

With deceit, war and love swirling in the clouds above a shattered world that was once Livvy's home, she'll be asked to do something a girl with a broken heart never thought possible.
Fight for Windhook. Fight for her world.
Take wing with Livvy, one heartbeat at a time.

Long before Mr. Maggert ever asked if I would be interested in reviewing this book, I knew that I would do it.  Why?  Because I LOVED the first book in the series.  If you want, you can read my review here.

Starting the book, however, I wasn't quite sure that I was the right person to read this book.  I felt like I didn't remember enough from Heartborn, and I was worried that I would not be able to do this review justice.

BOY WAS I WRONG.

Although Maggert starts Moonborn without any reminders of the previous book, he writes so that as his audience reads the book, it all comes flashing back.  I went from being incredibly confused and frustrated to being in love with all of the characters and in tears when the book ended.  For those of you who are new to Maggert's writing, don't read his work if you like feel good stories.  This is an author who knows how to reach into your soul and crush you.  I know this from firsthand experience.  But as I lament that, I must praise Maggert for his skill.

Near the beginning of this book, Maggert introduces a little scum bag named Garrick.  I enjoyed hating this man almost as much as I enjoyed hating Umbridge.  Grr!  I knew that this book was headed for violence and war and I was actually excited to see his little corpse laying still on the battlefield.  Enter Danila.  With her, comes in my absolute love for this beautifully written man.  Maggert definitely demonstrated his mastery of characterization by taking Garrick from being a sniveling pest to a character I want nothing but the best for.

Maggert shows this skill once again with the characters of Marti and Brigha.  Not that I like them any more now, but he makes them pay for their flaws in a way that they respect and, especially in Brigha's case, are grateful for.

Lastly, Maggert's style is exquisite.  The man uses so many adjectives that I was drooling each time he described a food and I could see every scene and feel every blow in the battle.  If Maggert's goal was to give his audience a breathtaking experience, allow me to be one of the first to congratulate him on his success.

I felt like Maggert had so much going on in this book that he couldn't keep his own story straight at times.  There are two places in particular that I truly had, and still have, no idea if I'm confused or am simply not remembering the story correctly.  I think these confusing points take away from an otherwise poignant plot.

Even though I was able to play catch-up, I think Maggert might have a hard time keeping readers interested by keeping them confused.  Many readers spend so much time with their head in a book that plots can often get jumbled up.  We're not dumb, but he does need to give a helping hand.

This last point is more of me grumbling about the unfairness of Maggert using a character to rip my heart out than anything he actually did "wrong."  There is a VERY important character that I fell in love with in Heartborn and was given a teaser of the possibility of him returning in Moonborn.  Just a teaser, no reality.  As I read, I keep a notebook filled with my notes, so that I can more easily put my review together.  When I came to this point in the book, I simply wrote "Bad author! Bad!" Not that Maggert could hear me or anything, but I guess I liked the illusion that my heart wouldn't be as broken if I at least pretended I got to scold the mean author man.