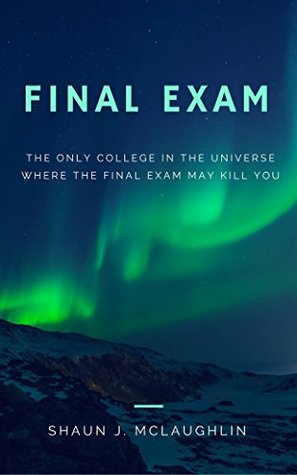 Final Exam: The Only College in the Universe Where the Final Exam May Kill You by Shaun J. McLaughlin
Published on December 7, 2016 by Raiders and Rebels Press

Final Exam begins a series, written in the classic sci-fi visions of Asimov and Heinlein, that examines human society as people expand through our galaxy. In this future, there is no dystopian dictatorship, no cyber-menace overlord, and no inter-species warfare. Humanity faces its historic enemy, humankind, but under different skies. Even as civility and civilization advance through the millennia, greed, gangs and malice remain as wolves chasing down the weak and vulnerable.

Final Exam introduces Shane O’Ryan, an idealistic, rich kid, about to graduate from an elite and secret academy that trains special agents. He and his secret fraternity investigate infractions of the colonization charter related to protection of intelligent species and the ecosystems on which they depend.

For his final exam, Shane and his student partner visit a snowy vacation planet to solve a mystery—how could a sub-intelligent species leap 50,000 years in evolution in months to harness fire and develop a language. Their investigation leads them into deadly conflict with a sophisticated gang trying to gain control of the planet for its mineral riches.

Again, I didn't completely hate McLaughlin's writing.  I strongly believe that his writing is more suited for a longer piece of literature.