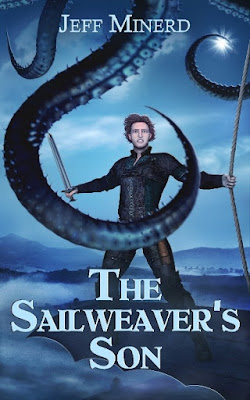 
Description
The Sailweaver’s Son combines traditional fantasy with a dash of steampunk and takes young readers to a unique world—Etherium. A world where mountains rise like islands above a sea of clouds and adventurers travel the sky in sail-driven airships.

When fifteen year-old Tak rescues the survivor of an airship destroyed by one of the giant flammable gas bubbles mysteriously appearing in the sky of Etherium, the authorities react like a flock of startled grekks.

Admiral Scud accuses Tak of sabotage and treason. Tak’s father grounds him for reckless airmanship. Rumors spread that the bubbles are weapons devised by the Gublins, a race of loathsome but ingenious underground creatures. The King’s advisors call for war, hoping to win much-needed Gublin coal.

To clear his name, solve the mystery, and prevent a misguided war, Tak must do what anyone knows is suicide—visit the Gublins and find out what they’re up to. When the wizard’s adopted daughter, an oddly beautiful and irksomely intelligent girl from the Eastern kingdoms, asks Tak to help her do just that, he can’t say no.

The adventure will take Tak from the deepest underground caves to a desperate battle on Etherium’s highest mountaintop. It will force him to face his worst fears, and to grow up faster than he expected.

He’d seen nothing like it in his life. No sky rider ever had. It was an enormous bubble. Twice the size of the battleship. As it rose into the sky, the bubble wobbled and shimmered, squished into lopsided potato-like shapes then snapped back to roughly round. It was more or less transparent, but its rippling surface glistened with a rainbow of colors where the sunlight played on it. The bubble rose with alarming speed, rolling this way and that with the wind. It was not on a collision course with the battleship—yet. It was some distance off the port bow.
The lookouts didn’t see it until it was too late. As the giant bubble drew level with the battleship, Tak heard the faint ringing of alarm bells. The ship came to a full stop, propellers going still, sails slanting upward to create drag. Tak could imagine the startled looks on the faces of the men on deck. He was wearing such a look himself. Then the wind shifted and gusted again. The sky riders have an old saying: Our lives rely upon the wind, and the wind is not reliable. The saying proved true for the men on the battleship. The wind took hold of that bubble and hurled it directly at them.
Too late, the captain cried the order to turn hard to starboard, trying to veer away. Too late, the propellers leapt to life and the ship lurched, listing heavily with the effort of making the turn while men scrambled in the rigging to adjust the flapping sails. Large battleships like the Vigilance are known for their strength and forward speed, but they are not known for their maneuverability. The bubble hit the ship broadside and enveloped it entirely.
And then both ship and bubble exploded into a burst of fire that left a glowing yellow spot like the sun behind Tak’s eyes, which had snapped shut. When he opened his eyes, blinking, the bubble was gone and the ship was engulfed in flames. The sails were ablaze. Horrified, Tak watched as burning men leapt from the deck like showers of sparks, their flaming parachutes useless.
As Tak sat stricken in the stern of the Arrow, gaping in shock and disbelief, he felt the first rumbles of the giant explosion in his chest. He felt hints of its heat on his face. And then he saw the shock wave expanding in all directions from the ruined ship.
Including his.

Jeff Minerd thought he stopped writing fiction a long time ago until the story for The Sailweaver’s Son came to him not in a dream but after a dream. He is grateful for that, and for the opportunity to explore the world of Etherium and entertain others with what he finds there.

Jeff has a son, Noah, who is also a writer and avid reader. Jeff hopes to one day place in the top ten—or maybe even top five—of Noah’s favorite authors. But the competition is pretty stiff.

More recently, Jeff has worked as a science and medical writer for publications and organizations including the National Institutes of Health, MedPage Today, The Futurist magazine, and the Scientist magazine.